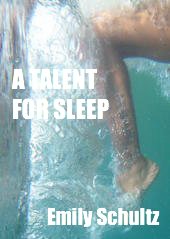 After Justin’s father left and his mother began drinking, Justin would walk through the rooms and touch things his father had touched, what she hadn’t thrown out or broken, would feel these solid objects between his fingers: the door frame, the lamp switch, the gold glass ashtray, the plaid couch. But other times, he was convinced he was hovering—viewing the room and everything in it from a fair distance off the floor. It was a gradual thing, the hovering, occurring with greater and greater incidence between the years of twelve and fifteen and a half. It even seemed to change the way he slept, as if he was lying down in a haze for seven hours but not sleeping at all.

This week’s story is “A Talent for Sleep” by Emily Schultz. It originally appeared in print in July of 2011 when it was published by The New Quarterly. We now have the full story available online here.