If You’ve Been Naughty, Beware of the Krampus

While standing at the airport, a child ran up to me and told me, “Santa isn’t real!”  I looked at the child’s parents, whose faces had twisted in both sadness and perhaps fear at their child’s remark—Sadness because of the idea of their little one growing up and fear because they no longer could hold anything over the child to warn them to “be good.”

With my family and friends going through the process of having children, Santa, the Tooth Fairy, and other mythological characters (sorry if I have spoiled anyone’s beliefs with that statement) have been a focal point of conversation. What imaginary qualities and possibilities do they want to raise their children on? What traditions do they want to start or not start because of the potential of breaking their child’s heart when the truth comes out?

Whether it’s having your shoes filled by Saint Nicholas, finding the Christmas pickle, or an immaculate birth, the true Christmas miracle seems to be keeping your children from melting down in the aisles of any department store. Those holiday displays are good. Too good. Even myself, someone who has faith in their own self-control, has walked out of a store during the holidays with some contraption I really didn’t need.

In my friends’ quest to avoid mopping the floors with their begging children, one Christmas myth came up that is still largely unknown to Americans (with the exception of recent ho-hum Hollywood incarnations)—the myth of Krampus, Saint Nicholas’ evil sidekick.

Predating Christianity and appearing in several regions of Europe (particularly Austria), the Krampus figure is said to be half-goat, half-demon (likely a remnant of pagan lore), and in charge of punishing children that have misbehaved (translation: drowning, beating, dragging them to hell). Horned with a long, red tongue and dressed in furs, Krampus is not a free agent and is often depicted in chains to portray his subservience to his more benevolent counterpart (a nod at binding the devil).

On December 5th, just a day before Saint Nicholas Day, the streets of select countries of Europe are flooded with individuals dressed as these ghoulish creatures to celebrate Krampusnacht and scare children with what could be should they choose not to behave.

It is not uncommon to see Saint Nicholas and the devilish creature together in dysfunctional brotherhood at this event, illuminating that Krampus is a holiday nightmare that is celebrated. In some places there are very frightening Krampus door-to-door visits and runs/parades that include hitting passersby and onlookers, including children, with sticks. 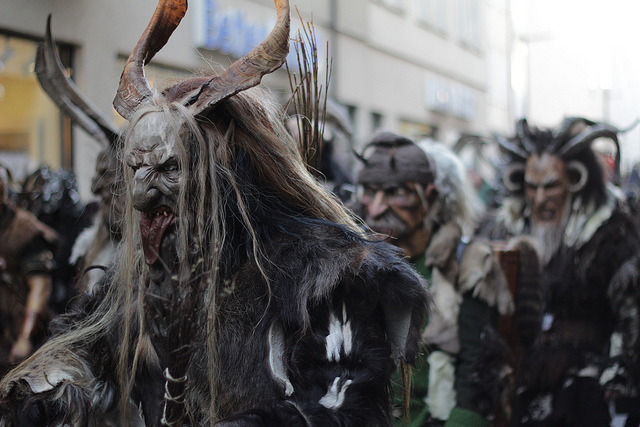 So, if Santa isn’t doing it for your kids anymore (and you need something more than a naughty or nice list), or the holiday season is too cheery for you, this is a tidbit of folklore you may want to adopt.